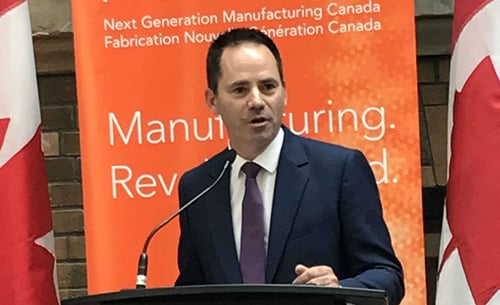 Why did you decide to do this project in Canada, and how does Canada benefit from iVexSol being here?

Canada has an outstanding reputation in manufacturing and has the critical mass of life science expertise that is needed to sustain such an endeavour. This, and the presence of partners like the Centre for Commercialization of Regenerative Medicine in Toronto, whose goal is to help startups such as ours grow and expand, made the decision much easier to make. This project will potentially create about 470 full-time positions in Canada and will act as the catalyst to build a world-class ecosystem around gene-editing tools and technology in Canada.

In addition to the salaries and taxes we will pay, our presence will help build the ecosystem in this space. Canada is an emerging player in CGTs and is home to about 40 companies, though only a few are globally recognized. This project will increase the competitiveness and sustainability of Canadian companies by providing access to high-quality lentiviral vectors (LLVs) and seasoned technical experts in the field.

We anticipate this project minimally enabling the creation new immunotherapy, technology and engineering companies. And we believe this will also attract foreign start-ups to Canada.

You talk about iVexSol creating several hundred jobs. What kinds of jobs would they be?

There will be a stratification of jobs created: Non-technical support roles, technical staff, operations, safety, managerial and administrative staff, as well as PhD-level employees.  If you were to think of traditional manufacturing, you’d have a very good idea of what is needed here, the only difference being that our product is made by cells and not machines. You still need all of the support mechanisms to keep those cells - or machines - operating at peak efficiency, as well as the means to ship your product to your customers.

Where does demand come from and what’s the potential size of the market?

The commercial launch of two cell therapies and one gene therapy in 2017 was the catalyst to spark unprecedented market growth. Before this point, the pundits were not really sure that cell and gene therapies (CGTs) could be commercially viable. Initially the CGT market was worth $0.1 billion US, but it is estimated to grow at an impressive compound annual growth rate of 44 percent over the next decade. That means a market opportunity of $2.4 billion US by 2024 and $9.7 billion US in 2030.

Demand for vectors comes from therapy providers like academic medical centres, startups, and big pharmaceutical companies. Gene delivery vehicles such as viral vectors are an essential raw material for both cell and gene therapies, so as the number of investigational new drugs (INDs) increases, so does vector demand.

Former US Food and Drug Administration Commissioner Scott Gottlieb said the FDA expects to receive around 200 new INDs each year for the next five to 10 years, adding to the 800 INDs that are already on file. That is only the US market. With around 750 gene-based therapy candidates in various stages of clinical development and this expansive growth, demand for vectors is high and growing.

What's the biggest challenge in improving the manufacturing of viral vectors?

It is difficult to point to a single challenge but scaling production in a cost-effective manner is definitely in the top 5. This is because current production methodologies are based on laboratory-derived methods that work at small scale. This is more than sufficient for the lab, but once larger and more tightly regulated stocks of vector are needed, the provider is faced with either producing multiple smaller (5-10 litre) batches or scaling to larger (50-200 litre) volumes. Both are high-risk and fraught with difficulties.

iVexSol’s technology revolutionizes vector manufacturing by stably introducing genetic material into the cells at the very first step – at small scale - to avoid the issues associated with scaling. Moreover, we use inducible genes to delay the unavoidable production of toxic materials until the very last stage of production.

Once cells are grown to the desired scale, the genes are turned on and virus production begins. By using such a system, we can increase production by at least 10-fold, while completely avoiding costly and time-consuming manufacturing failures.

First, we will have created a diverse, stratified and highly innovative workforce producing next generation viral vectors in a world-class manufacturing for a global market. Secondly, we will have shortened clinical development timelines, which means lifesaving, innovative new medicines are being approved and brought to patients much more rapidly.

And finally, but very importantly, our lowered cost of goods would reduce the price of these new treatments and in doing so, provide access of these new and existing treatments to more people around the world.

END_OF_DOCUMENT_TOKEN_TO_BE_REPLACED

Companies lined up to pitch Supercluster projects at CMTS